Home > General Audience > The Earth without the Moon

The Earth without the Moon 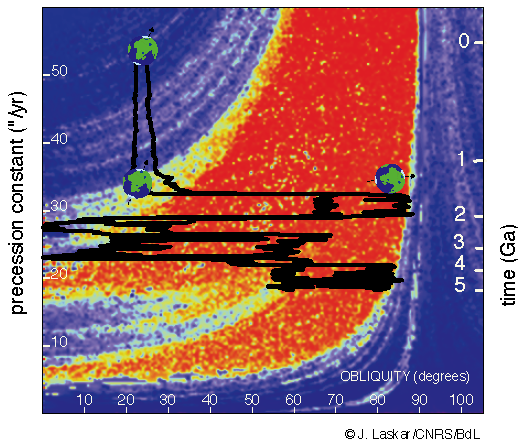 Evolution of the Earth’s obliquity for 5 Gyr in the future. In the background, the color gives the stability of the spin axis of the Earth. Blue corresponds to stable motion, and red to highly chaotic behavior. The time from nom is given in Gyr on the left axis, and the Earth obliquity (inclination of the equator on the orbital plane of the Earth) is on the horizontal axis. At present, the average obliquity of the Earth is 23.25 degrees, and the obliquity oscillates around this value with 40 kyr periods and 1.3 degrees amplitude. The black curves represent the limits of this oscillation. As the times goes, du to tidal interactions in the Earth-Moon system, the Earth rotation slows down and the Moon goes away at 3.8 cm/year. The torque exerted on the equatorail bulge of the Earth thus diminish, and the precession frequency of the Earht spin axis (on the left axis of the figure) decreases. After about 1.5 Gyr, the precession period of the Earth becomes comparable to the precession periods of the orbital plane of the Earth, due to planetary perturbations. The Earth then enters a large chaotic zone (in red) and the spin axis wanders chaotically between 0 and more than 85 degrees. As the motion is chaotic, a small difference will lead to a different solution, but the genreral behavior depicted here will remain the same, and there is no possibility for the Earth to avoid entering into the zone of strong chaotic motion (in red)

If we had no Moon ! General audience paper published in “Pour la Science” in 1993

Scientific papers in Nature in 1993